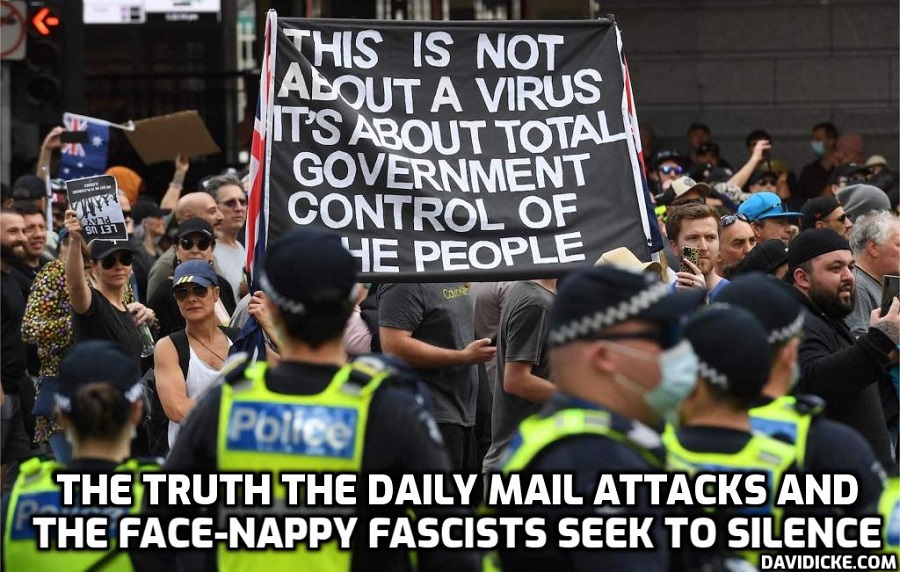 Police have used tear gas, pepper spray and rubber bullets on demonstrators in Melbourne and arrested more than 200 people after an anti-lockdown rally descended into a riot.

More than 4,000 people turned up to the ‘freedom rally’ in the Australian city on Saturday morning and escalated during the afternoon despite Premier Dan Andrews saying the state is on the verge of a Covid catastrophe.

By late afternoon six officers has been hospitalised – including two with suspected broken noses, one with a broken thumb and the others with concussions – and 218 protesters arrested.

Police issued 236 fines for breaching coronavirus directions, and have three people in custody for assaulting police. Smaller protests have also erupted in Sydney, Brisbane and Cairns.

‘While there were some peaceful protestors in attendance, the majority of those who attended came with violence in mind,’ Victoria Police said in response to claims pepper ball rounds and OC foam canisters were fired at demonstrators.

Revealed: The Extent of the Daily Mail’s Support for the British Union of Fascists

The Daily Mail is underplaying the support it gave to Oswald Mosley, the leader of the British Union of Fascists in the early 1930s.

In a recent smear on his son Max Mosley, one of paper’s heavy-hitters Richard Pendlebury wrote: “For a brief period some of the mainstream press — this paper and the Daily Mirror included — praised the BUF’s supposedly ‘conservative’ agenda.

The story, bylined to Viscount Rothermere, praised Mosley for his “sound, common sense, Conservative doctrine”, and pointed out that: “Young men may join the British Union of Fascists by writing to the Headquarters, King’s Road, Chelsea, London, S.W.”

For a full six months, the Daily Mail was overtly sympathetic to the Black Shirts until a rally at the Kensington Olympia, in the summer of 1934.

However, the Daily Mail did not drop its support for Mosley’s BUF wholly because of their ‘violence’ and ‘intolerance,’ as Pendlebury claims.

“That support soon evaporated as violence and an intolerance that was very evidently ‘un-British’ became synonymous with the movement.”
Read More: The Extent of the Daily Mail’s Support for the British Union of Fascists