Infowars host Owen Shroyer of the War Room announced during Friday’s broadcast that the US attorney’s office in Washington D.C. is charging him with illegally entering a restricted area on the Capitol grounds and disorderly conduct during the January 6th rally.

According to the DPA, Shroyer wasn’t allowed to engage in disruptive conduct at any place upon U.S. Capitol Grounds with intent to disturb a session of Congress or any other capitol hearings.

Even a screenshot of Shroyer in D.C. from January 6th that the agent used in the criminal complaint is labeled, “Video: Alex Jones Tried To Stop Storming Of DC Capitol.”

So, this would constitute the War Room host trying to stop “disruptive conduct at the Capitol Grounds” not “engaging” in that behavior. 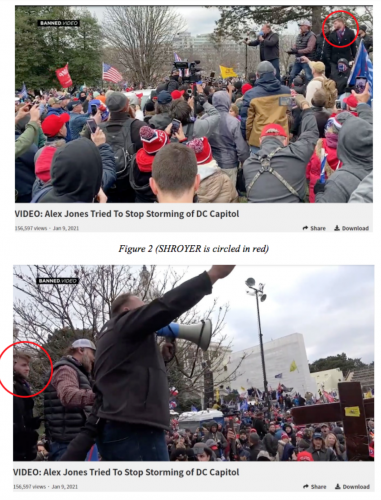