CDC Director Rochelle Walensky admitted during a press briefing last week that her claim that over 99% of covid patients dying in hospitals were unvaccinated was a load of crap.

The claim, which was also echoed by Anthony Fauci, Surgeon General Vivek Murthy and other top officials, was shown to be a lie by the CDC’s own data released by the Washington Post on July 29. The CDC’s data showed the number of covid patient in-hospital deaths in May were 15% among the vaccinated, not 0.5% as they all claimed — which is 30x higher than they stated. 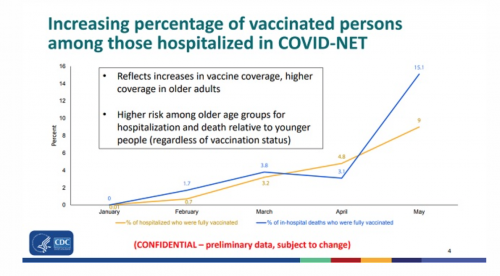 The CDC and White House officials didn’t tell the public that because they were in overdrive trying to scare everyone into taking Big Pharma’s experimental mRNA “vaccines” despite their rapidly waning protection.

After being questioned Thursday on the 99% number by a CNN reporter, Walensky said that “those data were data that were from analyses in several states from January through June and didn’t reflect the data that we have now from the Delta variant.”

In other words, to get the 99% number they not only cherry-picked data from what ever states they wanted but they included data from January when covid deaths were at their peak and less than 10 percent of Americans had even taken the vaccine. Additionally, they excluded the most recent data showing the vaccines’ protection was waning!

Read More:  CDC Director Admits Claim That Over 99% of In-Hospital Covid Deaths Were Among Unvaccinated People Was Junk