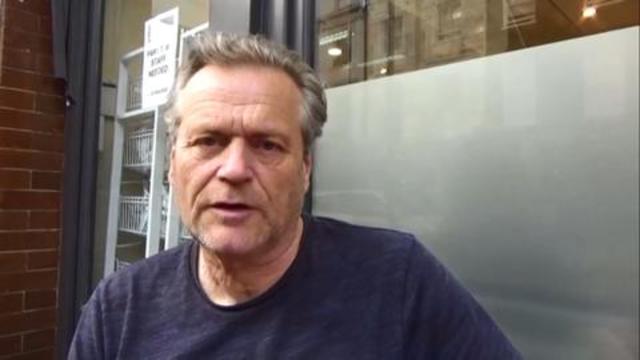 I first stumbled across Wayne Smith in the summer of 2020.

I’d been approached by a man who’d told me that one of his relatives had been murdered in hospital: he wanted me, as a journalist, to get his story published. To cut a long story short, whilst investigating, I found Wayne on Twitter (handle: @socializedmedi1).

Wayne’s elderly father George had been killed in 2013, at home, by a visiting NHS nurse with an overdose of a drug called Midazolam. While Wayne was out of the room, she injected his dad with a lethal dose of the killer drug, a drug used in the US in executions. After explaining to Wayne that she’d given the shot to ease George’s suffering, the nurse promptly left. Minutes later, Wayne’s dad was dead.

Through his grief, Wayne tried to work out what had happened. In his mind, it was clear his dad had been murdered. He tried to track down the nurse but she was nowhere to be found. He went to the police but they weren’t interested.

Seven years on, he was still desperately looking for a platform … he wanted his voice to be heard. I said I’d try to get his story into a national newspaper. I pitched and failed.

By May 2021, I had spoken to 20 people who’d been through similar experiences to Wayne. They too wanted their stories heard. I went to the papers – to no avail. The story was big now – I’d discovered that a new end of life care pathway had been introduced at the start of the pandemic in March 2020, a new government directive, which instructed NHS staff how to treat people dying from the deadly virus. The protocol was identical to that of the Liverpool Care Pathway, which had been abandoned in 2014 after it was deemed to be inhumane. But it was back, under a new name (the Gold Standard Framework) and it – a combination of starvation, dehydration and killer ‘cocktails’ of morphine and Midazolam – was being used to cull the elderly. And Wayne had all the proof – the evidence needed to not only get a lot of the so-called elite in trouble but perhaps to bring down the government. Wayne had proof of democide: had the people of Britain got wind of that, things might have taken a new and very different turn.

On June 4th 2021, Wayne appeared – with five other people, myself included – on an internet news show called Right Now. It was seen by millions and made a huge and definite impact on all who watched it.

Shortly afterwards, I was invited to make a documentary with film company Ickonic: Wayne Smith was immediately booked in to appear. With eight years of research into the euthanasia he knew was happening in UK hospitals, care homes and hospices – and in some cases, like his dad’s, at home – this highly knowledgeable man knew what he was talking about. He understood law, and government policies and medicine; he could quote dates, facts and statistics from memory and could speak eloquently on the subject he’d clearly spent thousands of hours researching. It had become his life’s work and his ultimate aim was to expose the barbaric protocol being implemented and to bring an end to it.

Once he’d agreed to be part of the documentary, Wayne and I talked on the phone and exchanged WhatsApp messages regularly. He loved to chat and was so passionate about what he was doing that it was sometimes hard to get him off the phone! That’s why it was strange when one day in late July I realised that I hadn’t heard from Wayne for a while …

I checked my WhatsApp messages to him: he hadn’t responded to the last three – on July 10th, 15th and 20th. I called a mutual friend. He’d had no response from him for a couple of weeks. Over the following few days, the messages between me and the mutual friend were peppered with “heard anything from Wayne?” and by the 24th we both reluctantly admitted that we had a bad feeling. We brushed it aside over the weekend but on the 27th I decided to call the police. I knew in my heart that something terrible had happened.

The police called me back on July 28th and confirmed my worst fear: Wayne had been found dead at his home in Chichester, West Sussex on the Saturday – July 25th. The police officer I spoke to – PC Bateup – said Wayne had died of Covid and that he’d had symptoms. He then added “I hear he was a Covid denier.” I know it’s hard to hear a smirk but I sure as hell heard one at that moment. (It would have been useful if the police constable had let me know when and where Wayne had been tested instead of making a snidey remark like that but he wasn’t forthcoming with that particular information.)

I was left reeling and baffled. Wayne would have said something if he’d been ill. He was supposed to be meeting me to discuss his part in the documentary on Monday 2nd August, and he’d have definitely called if he’d been feeling rough prior to that.

I checked his Twitter account and was surprised to see hundreds of retweets, the last being on July 20th. That jarred with me. As far as I knew, Wayne wasn’t a big retweeter – he was a man on a mission with important stuff to share. He wrote his own tweets. I scrolled back but couldn’t find any of his tweets at all. Two friends of his called to tell me that, in private message conversations, Wayne’s comments had completely disappeared, leaving a one-sided written chat, making it look, as one of the friends said “as if I was talking to myself”. That was odd.

In recent months, Wayne had been liaising with doctors, lawyers, NHS executives and government officials about his findings: he was in possession of documents and information that may well have posed a threat to those involved in the implementation of end of life ‘care’ pathways. He was making great headway.

I left it a day or so before announcing his death on social media. By then, I was feeling decidedly uncomfortable about his sudden and untimely demise. Friends Wayne had never mentioned got in touch with me. One was Dr. Mark Jones (who had met Wayne a few times and had interviewed him for a video which has now been seen by thousands) who, after speaking to me, called the police to find out more about Wayne’s passing. Having ‘Dr.’ in front of his name served him well – he gleaned more information than I did, with the police disclosing that Wayne was to be cremated on August 4th and giving him the number for the coroner’s office. Dr. Jones then suggested to the council that the cremation be delayed and, amazingly, they agreed. He then contacted the coroner’s office and demanded an autopsy.

I spoke to Sussex police several times since making my initial report on July 27th. According to them, they were ‘called to the scene’ on July 25th, after two friends of Wayne alerted them.

Wayne was found dead in the house and was confirmed as ‘life extinct’ at 3pm. It was agreed that he’d probably died the previous day – on July 24th, the day the bad feeling had kicked in. The police officer – PC Banks – confirmed to me on the phone on August 2nd that Wayne had died of Covid. The coroner’s officer – Vanessa Tiller – said that he’d had a positive covid test.

There were 28 Covid deaths in the UK on the day Wayne was found dead: it would appear Wayne was one of them.

Had Wayne been in a grave, he’d have been turning in it. He’d always maintained that the pandemic was a ‘scamdemic’ and didn’t trust the government narrative of Covid. There’s no way he’d have willingly had a test. Had he developed symptoms of anything resembling the flu or pneumonia, he’d have said he had a bad cold – or a case of ‘man flu’ perhaps.

On August 5th, Dr. Jones and I formally requested an autopsy. We also want a burial – not a cremation – for our friend and comrade Wayne. We’ve been told that he had no close family so it’s down to his friends to do the right thing. The right thing would be to find out what really happened to him and to make sure no foul play was involved.

Wayne wouldn’t be bothered about any kind of flashy send-off – all he’d want is for truth and justice to prevail and for those who had faith in him to carry on where he left off. That’s what he would have wanted. And that’s what his friends are going to do.

The OUTRAGEOUS response of the West Sussex ‘coroner’ about the strange death of Wayne Smith. They say he died of ‘Covid’ (he clearly didn’t) because they took a swab AFTER his death and it tested positive with a test not testing for the ‘virus’. These people are a JOKE – a very, very sick one 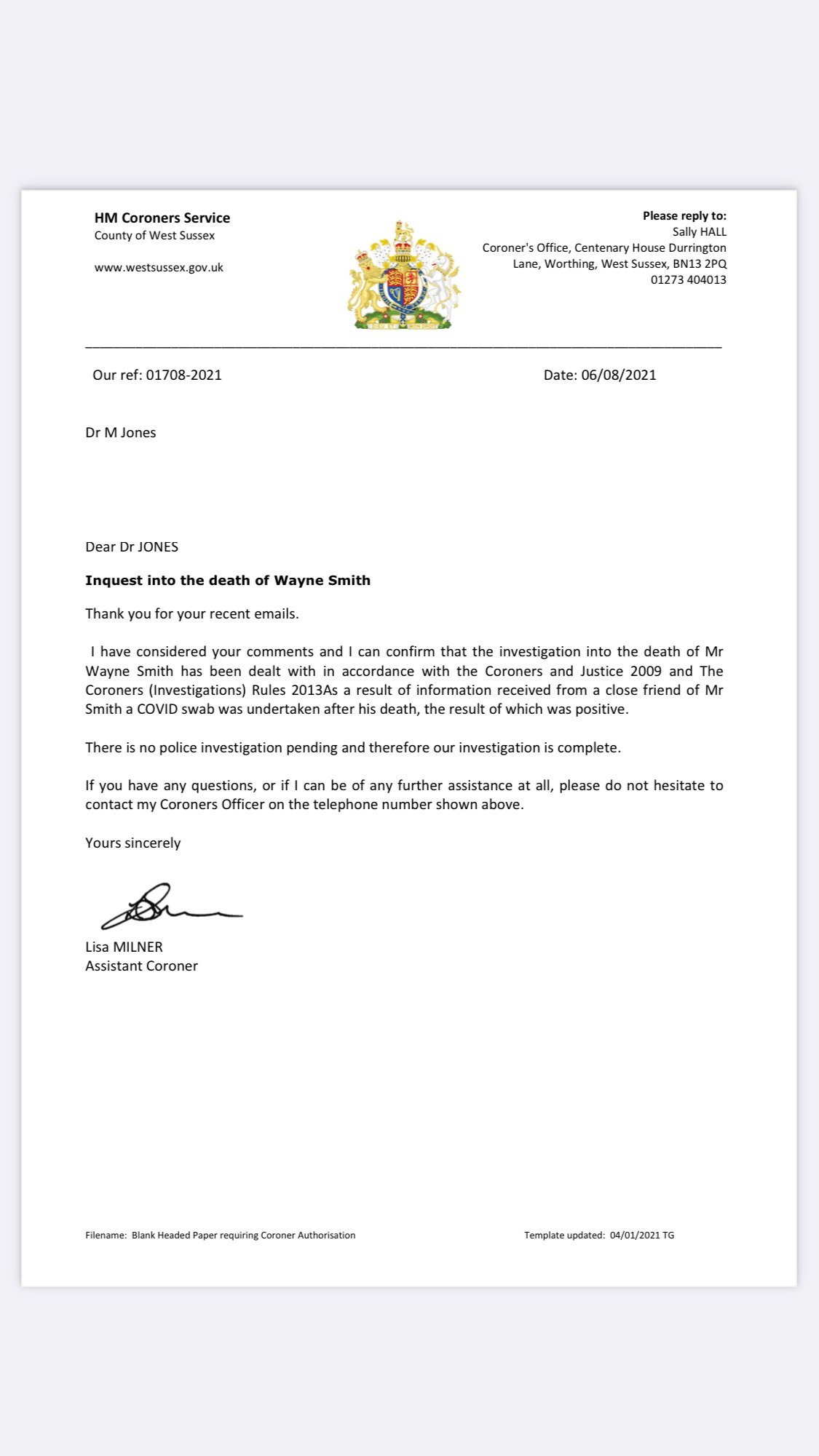